Welcome to your destination

Porto and the north of Portugal 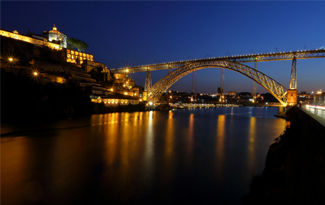 It was in the Porto and in the North regions that Portugal was founded in the 12th century and the Portuguese became a people and a nation.

Porto, a World Heritage city, is the gateway and departure point for a journey across the natural and cultural diversity of the region. It is known for the Port wine which is shipped from here all over the world, but also for a heritage which combines ancient churches and monuments, such as the Cathedral and the Church of São Francisco, and modern buildings, such as Casa da Música and the Serralves Museum.

And also for its School of Architecture which bred names like Álvaro Siza Vieira and Eduardo Souto de Moura, both winners of the Pritzker Prize. The region is crossed by the River Douro which enters Portugal between the ravines and mountains of the interior to flow through the entire World Heritage landscape where the Port and Douro wines are produced. It is from here that the wine is sent to the lodges at Vila Nova de Gaia, as the cruises touring the region make their way upriver.

In this area of mountains and natural parks, the region’s heritage is seen in its castles, such as the one in Guimarães, and the shrines and churches which are the stage for pilgrimages in the summer. You will find the Baroque architecture of Northern Portugal in its stone and gilded carvings side by side with rural chapels. In its cities, which retain a human scale, such as Viana do Castelo, Braga, Lamego, Chaves and Vila Real, and in the manor houses and stately halls, you will find the genuine Portuguese people, who like to share their table, their customs and traditions.

In Porto and Northern Portugal, the joy and gratitude for all we have and are is experienced in the most spontaneous way.

If you'd like us to call you back to discuss a new project
please fill in your details and we'll get back to you.

We use cookies to ensure that we offer you the best experience on our website. If you continue to use this page we assume that you agree to use.
Read More
Webdesign Megasites