Welcome to your destination

Islands of Madeira and Azores 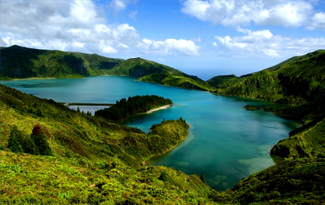 Right in the middle of the Atlantic, the islands of Madeira and Porto Santo are a haven of natural beauty. The exotic colours of the flowers stand out from among the blue sea and the emerald green vegetation; this is an archipelago where two thirds are a protected area and where the largest Laurisilva forest in the world is located.

The springtime temperature, felt all year round, cries out for open air activities. You can go for a walk along the network of levadas (irrigation channels), visit the city of Funchal and discover the heritage associated with the Discoveries or roam freely around the island. Boat rides are an excellent way of admiring the coastline from a different perspective. In such a naturally welcoming environment, balance and well-being are taken for granted. Madeira offers various tourist complexes and accesses to the sea with prime conditions for leisure boating and scuba diving. The island of Porto Santo, in particular, is the ideal place to escape from stress and undertake a thalassotherapy programme, or a beach holiday combined with a spot of golf. Popular feasts, which take place all year round, are opportunities to appreciate traditional gastronomic flavours and see Madeira partying, especially for the Carnival parades, the Flower Festival, the Atlantic Festival and, above all, the end-of-year fireworks display.

Mother Nature has created a land full of natural beauty, ready to be explored, in the blue immensity of the Atlantic Ocean: the Azores.
To the East, on the island of Santa Maria, the beaches of warm white sand are inviting, and the vineyards covering the slopes like an amphitheatre resemble giant staircases. São Miguel, the largest island, is seductive with its Sete Cidades and Fogo Lagoons. The power that emanates from the earth is felt in the geysers, hot thermal waters and volcanic lakes, as well as in the tasty "Cozido das Furnas" slowly cooked inside the earth. In the Central Group, the islands of Terceira, São Jorge, Pico, Faial and Graciosa are set harmoniously in the deep blue sea, where whales and dolphins can be spotted, to the delight of visitors. On Terceira, the World Heritage town of Angra do Heroísmo, as well as its festivals, is steeped in history. Faial is the cool blue of the hydrangeas, the marina painted colorfully by yachtsmen from all over the world and the extinct Capelinhos volcano, which resembles a lunar landscape. In front is Pico, a mountain that emerges from the sea, with vineyards planted in black lava fields, a unique culture that also has World Heritage status. On São Jorge, the highlights are the Fajãs and the cheese, a unique specialty with an unmistakable flavor. Graciosa, graceful in both name and appearance, is an island of green fields covered with vineyards that contrast with its peculiar windmills. In the Western group, on the island of Flores, the beauty of the natural waterfalls and lakes carved out by volcanoes is dazzling. The tiny island of Corvo has a broad, beautiful crater at its centre, and attracts many species of birds coming from both Europe and America.

These are the Azores. Nine islands, nine small worlds that have as many similarities as differences, but where the friendliness of their inhabitants is shared by all.

If you'd like us to call you back to discuss a new project
please fill in your details and we'll get back to you.

We use cookies to ensure that we offer you the best experience on our website. If you continue to use this page we assume that you agree to use.
Read More
Webdesign Megasites